Both games are rematches from the regular season, which both teams were evenly matched and should be wildly entertaining.

It’s got an E! True Hollywood Story vibe these 2019 edition of the conference championships. It’s a quarterback duel between a seasoned vet and a young stud with something to prove in each matchup. Tom Brady versus Patrick Mahomes will be phenomenal. I would love to see the young and humble Mahomes deflate the oversized ego of Cry Brady. On the other hand, I would also love to see my nemesis Drew Brees find his kryptonite in Jared Goff and the Los Angeles Rams’ defense. Whichever we get in the NFL’s final game is going to be exciting and yes slightly disappointing-I wish my Panthers were there again.

As I sit here and ponder exactly what the outcome of these games will be (in my 2015 NFC Conference Championship t-shirt thank you VERY much) here are my predictions of what will go down. 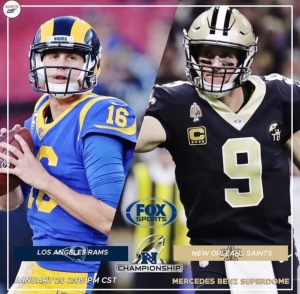 Keys to Rams success: Having Donald and Suh get pressure on Brees and being disruptive. Stopping both Kamara and Thomas. Limiting the big plays by the Saints and not turning the ball over, as a Panthers fan who sees the Saints twice a season I know more then anyone how they are known for converting turnovers to points and also swinging the moment quickly. Rams have to establish the run game with Gurley and Anderson early. By doing this they can have long drives and keep Brees on the sideline. The longer Brees is over there the better the Rams chances of winning are. 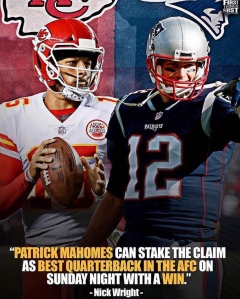 Keys to Chiefs success: The play of Patrick Mahomes. Mahomes has been the Chiefs rock all year with his dynamic play making ability and he needs to be is the best version of himself. The offensive line can help him out by protecting him and giving him time. They also can’t forget the run game, much like the Rams against the Saints, the Chiefs need to keep Tom Brady on the sidelines for as long as they can. Getting the run game going early will help this greatly. The Chiefs also need to make the most of their opportunities. If they force the Patriots to a 3 and out or get a turnover, they need to make something out of it and get points. Against Tom Brady those are far and few in between, and I wouldn’t want to go score for score with Brady and the Patriots. Lord knows if there’s 0:09 left on the clock in the 4th, Brady and the Patriots offense can and WILL send this game into victory or at the very least overtime.

Either way it’ll be a knock out, drag out between four contending teams, one I intend on getting a pint of Halo ice cream and enjoying as much-as a football fan who’s team is also watching from their couch-can.

What are your predictions? Leave a comment below and Keep Pounding!