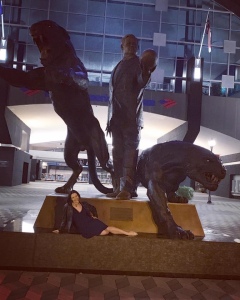 So I didn’t really post anything Friday because I had just completed a 10 hour drive from NJ to the suburbs of Charlotte, NC. My Godson made his Confirmation and I was chosen to be his sponsor so the husband and I drove 615 miles both ways to be there for that event (I’m actually writing this AS I drive home). The town was very beautiful, up to date and clean. The people were kind and courteous, stopping to talk to you in stores without any other reason other then because they wanted to.

The confirmation was a beautiful event, seeing my Godson be sealed the Holy Spirit was both really awesome and emotional. I felt like my journey with him from baptism to confirmation came full circle but I also feel like my job won’t ever be done inspiring him to grow in the faith. I love that my Godson and I have always shared such a close bond though the years, being away from him and his family (my cousins) since they moved have been tough. Tom and I learned from this trip that we’re not totally object to making the move down there. It’s kind of upsetting when we compare their way of life to ours, and we realize just how much we’re getting robbed blind in the state of NJ. Fiscally and geographically it makes so much sense. Carolina residents get ALL the seasons and enjoy much shorter winters, unlike in New Jersey were you can go from 85 to 55 degrees in a matter of one week and basically just get summer and winter as far as seasons go.

We do have things holding us back, namely family and our church community which is fabulous. In the future, I’m definitely going to research the possibility of relocating because these things aside, I could totally see Tom and I adapting to southern life.

After the Confirmation, we ate some southern BBQ, and also visited the Queen City, Charlotte. The city is breathtaking, fun, and cultured you’re able to drive in it with relative ease too (nothing like New York or Atlantic City). My favorite part of Charlotte though was visiting the Carolina Panthers’ team store and taking pictures with the statues in front of Bank of America Stadium (the BoA). I got emotional being able to visit the home of my beloved team having been a die hard fan of them since their inaugural season in 1995 (I was 6 years old at the time). The only thing I was sad that I missed out on was the $6 tour they give during the week of the whole stadium and it’ll definitely be something I do next time I’m down.

We’ve still got a long drive ahead of us but I wanted to check in while I had some down time on the road. I hope you all enjoy a couple more of my pictures from BoA and have a great Thanksgiving week. I’ll see you next Friday where my special guest Nate Francis and I will be LIVE on the ‘Are You There Friday? It’s Me Brittany’ ‘s Facebook page to review the Apple series 4 watch. If you can’t make it then you can check out the video I post on here afterwards reviewing it. 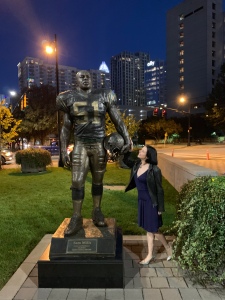 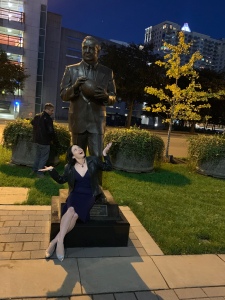 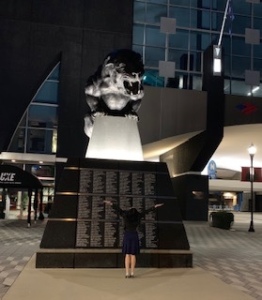 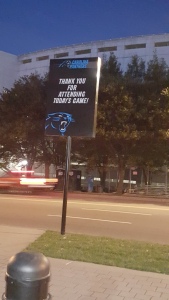 Wishing you and your families a happy and healthy Thanksgiving!

2 thoughts on “Gone to Carolina in My Mind”